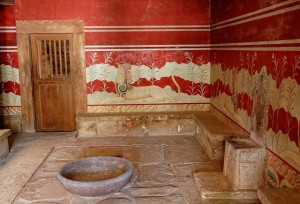 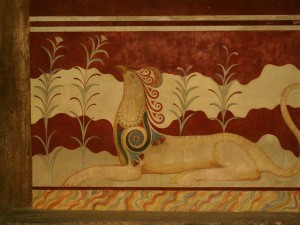 Knossos Palace consists one of the most precious cultural attractions not only for Crete but also for the whole world. So in this article we will make a tour to Knossos Palace in Crete, which was the largest palace in the Minoan civilization. In this palace lived Minos, who was born from the union of Zeus with Europe. Minos was the founder of the great naval force of the island and also he was a real threat to the pirates. Furthermore he was a wise legistrator and the leader of Minoan religion.

According to mythology, Minos was the child of the princess of Phoenicia, Europe who was kidnapped by Zeus transformed in the shape of a bull. He had been given the right to be king and make all laws according to his divine father, whom he consulted every nine years. Zeus was strongly connected to Crete, as he was born grown up there (in Psiloritis mountain), and some people believe that he was the first leader of the island.

Minos was married to Pasiphae. When once the people of Crete questioned his right to the throne, Minos had replied that it was a decision of the gods for him to be the King. As evidence for this, Poseidon sent a bull to be sacrificed by the king, but it was so beautiful that Minos decided to keep the bull and sacrifice one of his own bulls. This angered the god of the sea and made Pasiphae fall in love with the divine bull, the result of this relationship was the birth of a child, the Minotaur.

The famous architect and inventor Daedalus, who was working for Minos, built a labyrinth for the king, in which Minos closed the Minotaur, who was half man and half a bull. In the meantime the son of Minos, Androgeos had gone to Athens to compete in the races there. He won, but the king of Athens sent the young man to kill a bull in Marathon. The bull killed Androgeos. When Minos informed the death of his son, he declared war on Athens. Zeus destroyed the city, and the King of Athens was forced to obey to Minos’ demands in order to escape from the anger of the god. 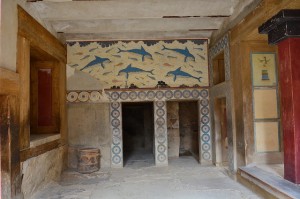 Minos asked from the king of Athens, to send every nine years seven young girls and seven young boys to Crete to be sacrificed to the Minotaur. This continued until the hero Theseus was chosen as one of the young people had to be sacrificed. The Minos’ daughter Ariadne fell in love with him. Daedalus helped him defeat and kill the Minotaur. After that, Theseus took Ariadne with him on the return trip to Athens, but he left her in Naxos. Minos punished Daedalus and his son Icarus by prisoning them inside the labirynth. Later Daedalus and Icarus managed to escape with wings that Daedalus had made.

The escape of Daedalus from Crete is one of the most famous stories of Greek mythology. He made wings for himself and his son with wax and bird feathers and they flew to freedom. But despite the warnings of his father, Icarus flew too near the sun and the wax of his wings melted, so Icarus fell and drowned in the sea, which by then was named the Icarian Sea. Daedalus arrived in Sicily and was protected by the king Kokalos. Minos wanted desperately to kill Daedalus, but when he arrived in Sicily, he was killed by the daughters of King Kokalos. After his death, Minos became one of the lords of the underworld.

The history of Knossos palace

The first settlement at Knossos dated around 7.000 BC in the Neolithic Age. The economic, social and political development of the settlement led to the construction of the magnificent palace of Knossos. Knossos was the main center of power in Crete.

The first palace was destroyed around 1700 BC, but it was rebuilt. The palace permanently destroyed in 1350 BC from a big fire. Since then, the palace area was transformed into the sacred grove of Rhea, but not re-inhabited.

The palace develops around the large central courtyard, which was a public meeting space. The second  west courtyard was an official access to the palace area and to the ceremonial area.

In the west wing of the palace were the official rooms of administrative and religious activities: the Tripartite Shrine, the Sacred Vaults and the Hypostyle Crypt. The Throne room is exceptional with its lustral basin and the alabaster throne flanked by benches. In the south wing the main areas are the southern propylon, the Corridor of the Procession and the South Entrance to the fresco of the Prince of the Lilies. The east wing includes areas of habitation and large reception rooms. The main reception room is the Hall of the Double Axes and the Queen’s Hall.

The numerous, magnificent art findings from the palace, including pottery, vessels, figurines, plates the archive of signs of Linear B, and the original frescoes are kept in the new, highly renovated Archaeological Museum of Heraklion.