Simi is the Greek island that has been declared as an archaeological site. The whole island and the little islands near Simi, have been declared as an archaeological site by the Central Archaeological Council, since they consist of 159 places and monuments that represent the history of the island from Prehistoric era till the latest years. In the ancient scripts we can find mentions to the Greek island of Simi with the names Kariki, Metapontis and Aigli. The name Simi comes from the name of the wife of Glafkus, who consider to be the first resident of the island. 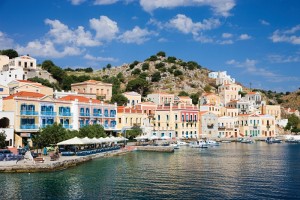 Many years ago, the houses of the island of Simi were characterized as listed buildings because of their special architectural, which is traditional and neoclassical. This new declare refers to the whole island is an archaeological site because historians found remains of different eras almost everywhere in the island. Moreover little islands around Simi were declared as archaeological sites. Those islands are Nimos, Saint Marina, Seskli, Kouloundros, Artikonisi, Troubeto, Pidima and Marmaras.

According to the “Historian Library” of Diodoros Sikeliotis, the first residents of Simi were the people that came there with Triopos. Their leader was Chthonios, the son of Poseidon and Simi, the island took its name after her. Later the king of the island was Nireas, the son of Charopos and Aglaia, which was a very brave and beautiful man. Due to the graces of Nireas, the island if Simi extended its influence to Knidia in Asia Minor. Nireas took place in the battle in Troia and lost his life, after that people from near islands tried to occupy the island but they abandoned it due to drought.

According to the Archbishop of Thessaloniki in the script of “Comments on Iliada” the name of the island came after the wife of Glafkus, Simi. Simi was the daughter of Ialisos and Dotida. Glafkus fall in love with her so he stole her and brought her to the island. Myth says that Glafkus was the first resident of the island. Ηe had excellent swimming skills and he was a great shipwright. 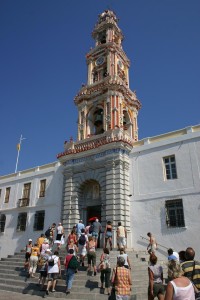 The monastery of Panormitis

The monastery of Panormitis is a great archaeological site that attracts many visitors every year. This monastery is located there since 15th century and the image of Archangel Michael considered to be miraculous. The monastery complex has a fortress-like architecture. It impresses from the first moment thanks to its size and elegant bell tower. The great bell weighs 750 pounds. Like the door, it is a creation of the last bell maker of the island, Tassos Anastasiades. The present church was built in 1783 and it is a large basilica. Near the temple are two museums. Many of the visitors rent a room inside the monastery and live there for some days. They help at the daily works of the monastery and also make their vacations. The monastery celebrates at November 8.

Archangel Michael is called by locals “thief”. Locals say that if you promise something to the Archangel you must bring it to him or else he will find a way to get it from you!