The submerged city that you see in the video is not in some exotic area of Latin America but in Elafonissos in Greece. This area named Pavlopetri is located near the island of Elafonissos in South Greece. This ancient city is dating back to 2800 BC and has been preserved in very good condition. The water sheltered from time and human intervention, most of the buildings. Very impressive is the fact that the ancient city of Pavlopetri is only 4 meters under the surface of the sea, so anyone can visit it. Clearly visible are the sunken houses with the gardens, the temples, the cemetery and the harbor. So far there have been identified 15 buildings with at least 12 rooms each and a complex water management system with canals and water pipes. 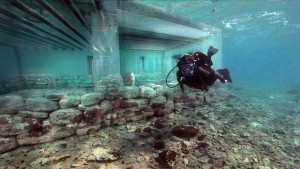 Scattered throughout the city area there are statues, large earthen jars, tools and other everyday objects. Overall the city occupies an area of about 9 acres and is probably the oldest submerged city in the world. Scientists speculate that the city sank from Richter 8 earthquake, around 1,000 BC while others shift the event in 375 AD

Geologist Fokion Negris, first president of the Academy of Athens, had described the underwater city of Pavlopetri since 1904! Greece did not have the proper tools nor the financial ability to investigate this submerged treasure. In 1967 professor of Oceanography at the University of Southampton, Nicholas Fleming, discovered the state and the next year he mapped it with a group of archaeologists from the University of Cambridge. He also cooperated with the Registrar of Sparta Antiquities, professor Angelos Delivorrias. In 2009 John Henderson was in charge of the archaeological mission organized by the University of Nottingham. Henderson created a digital display that shows in an impressive way, how was the city before plunging.