The State Museum of contemporary Art presents for the first time the exhibition “Stephen Antonakos – Prints” of the famous artist Stephen Antonakos. This exhibition traces the progress of Antonakos’s graphic work highlighting the artist’s many innovations: cuts; burns; collages; tears; seriality; handmade papers; reflection; and layered, multiple printing techniques. As always the artist’s concerns with incomplete forms in space dominate. The exhibition will run from November 27, 2015 until February 27, 2016 at the Lazaristes Monastery. The opening will be on Friday, November 27, 2015.

The work “Prints” is donated by the artist to the National Museum of Contemporary Art in 2012. Stephen Antonakos explained that he donated his work due to the close relationship that these works have with the works of artists of the Russian avant-garde from the Costakis Collection of the museum. “There are major roads that can be explored and be fruitful from the study of the relationship between the works of Russian constructivist and the particular and abstract geometry which I use in different ways too, in my own projects” explained the artist in his letter sent to the museum. 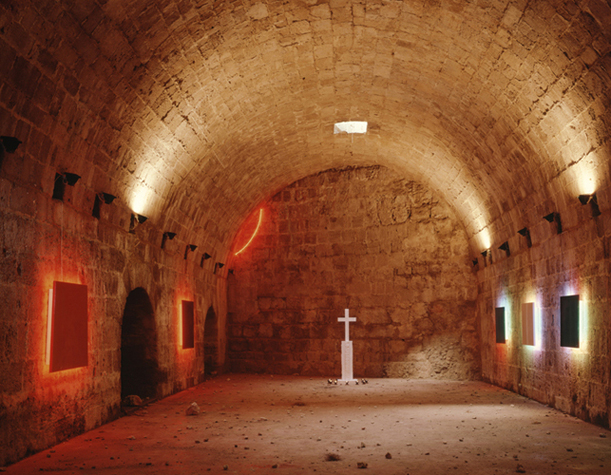 The curator of the exhibition is the art historian Yiannis Bolis who notes that: “His designs were initially associated with his compositions with neon (while they were in the stage of drafts). Then however, when they were completed, they claimed their own aesthetic value. Same applies with his “Prints” that are distinguished for their excellent technique. Stephen Antonakos starts from the primary elements of art, the line, the form, the level, the color and the light. Also in his “Prints” is obvious the connection with the Russian avant-garde and more specifically with Suprematism and Constructivism”. 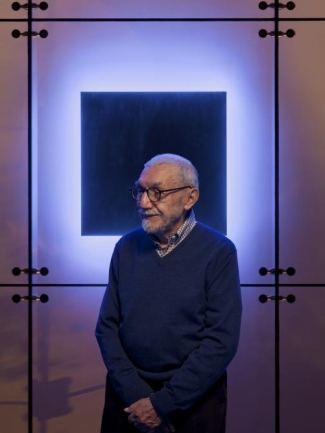 Stephen Antonakos was born in Greece (in the village Saint Nicolas in Gytheio) in 1926 and died in New York in 2013.

He was one of the pioneers in the use of neon for more than 50 years. He discovered neon as an artistic medium in 1960 and made it his prime tool of his creation.

His work includes sculpture, architectural interventions both indoors and outdoors, wall compositions where the neon coexists with the color and the metal sheets, drawings and prints and also meditation rooms and chapels.

One of his chapels belongs to the collection of the Museum of Contemporary Art at the courtyard of the monastery of Lazaristes donated by the artist to the museum on the occasion of his solo exhibition “Antonakos – Doxastikon” in 2000.

The exhibition will run until February 27, 2016