There is absolutely no chance for someone to visit Greece and do not taste the delicious Greek souvlaki! But the question is “where should someone go to taste really good souvlaki?” or “where do they have the best souvlaki in Greece?” 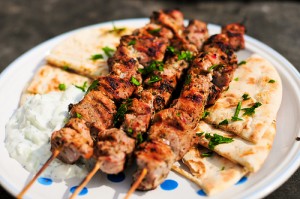 First of all, for those who doesn’t know what souvlaki is, here is the definition from Wikipedia:

“Souvlaki is a popular Greek fast food consisting of small pieces of meat and sometimes vegetables grilled on a skewer. It is usually served in a pita sandwich with garnishes and sauces, or on a dinner plate, often with fried potatoes. The meat usually used in Greece is pork, although chicken and lamb may also be used. In other countries and for tourists, souvlaki may be made with meats such as lamb, beef, chicken and sometimes fish (especially swordfish). The word souvlaki is a diminutive of the medieval Greek σούβλα souvla ‘skewer’, itself borrowed from Latin subula.”

There is no doubt that whenever and wherever you are going to eat souvlaki you are going to enjoy it! Everyone in Greece is specialized in making souvlaki, so the possibility of eating a souvlaki that tastes bad is not high. But the most famous souvlaki in Greece is served in a tavern downtown Athens, which is called Bairaktaris and is located in Monastiraki. 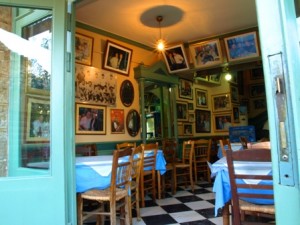 Meet the most famous Greek souvlaki  in the traditional tavern of Bairaktaris. The history.

When Isaak Meraklidis at 1960 was hiring Spiros Bairaktaris as an employee at his tavern (opened at 1925) neither of them would imagine that the 17 year-old Spiros (who was hired to wash the dishes) would serve, after some years the most famous Greek souvlaki to the most prominent figures of Greece.

At 1925 Mr. Isaak Meraklidis came from Asia Minor carrying with him the recipe for the best kebab of the world. After a while he opens a tavern that served souvlaki with this kebab inside and he hires Spiros Bairaktaris. They worked together from 1960 till 1969. Spiros learned all the secrets of the work near Mr.Meraklidis and in 1969 he left Athens to go to his place of birth, Agrinio. There he opened a restaurant that made big success. But Spiros always wanted to come back to Athens. So he came back at 1971 and opened his first restaurant in Athens named “Endelvais”. The restaurant became famous due to his famous customers as it became a celebrity spot.

Some day at 1980 a friend of Mr. Bairaktaris came to his restaurant and told him about the tavern of Mr. Meraklidis at Monastiraki. The tavern was for sale! Then Spiros bought the tavern and since then he serves the most famous souvlaki of Greece. If you want to taste the traditional Greek souvlaki then this is the place you have to go!