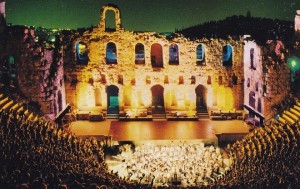 The performance of La Tosca is directed from the Argentinian director Hugo de Ana, who is also in charge of the costumes and the show props.

La Tosca is one of the most popular operas worldwide, composed by the famous Italian composer Giacomo Puccini. La Tosca was presented for the first time to the Greek audience in 1942. The leading actress of the homonymous role was the world’s famous Maria Kallas, who was only 19 years old.

The story of the opera

Floria Tosca is a diva of the opera, a woman who is desperately in love and extremely jealous of her lover. Baron Scarpia, is a dark character, who is known for his ruthless law enforcement. Between them there is a presence of a man, called Mario Cavaradossi. Mario is the lover and the honest patriot who is led to death, not because of his beliefs but for the simple reason that he has the love of Floria Tosca. Scarpia desires Floria, so he is setting traps and makes it impossible for Mario to escape.

The magnificent opera of La Tosca is going to be presented at Herodes Atticus Theatre, in the shadow of Acropolis.