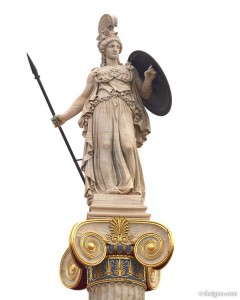 Goddess Athena was the virgin goddess of intelligence, wisdom, arts and literature. Also she was fierce and brave in battle; however, she only took part in wars that defended the state and home from outside enemies. She was Zeus’ favorite child and was allowed to use his weapons including his thunderbolt. Her holy tree was the olive tree and she was often symbolized as an owl.

Athena was the favorite daughter of Zeus. Her mother was Metis, the first wife of Zeus. Zeus was afraid that Metis would give birth to a son that would be more powerful than himself, so he asked for a herb that had the power to transform people to tiny little human beings. His grandmother Gaia gave him that herb and he gave it to Metis telling her that if she ate it she would gave birth to healthy children. Metis believed him and ate the herb. In a few minutes Metis started to become smaller and smaller! Then Zeus opened his mouth and ate her! But Metis was already pregnant. A few days later Zeus had strong headaches. He was screaming and the pain was unbearable.  All the goddesses tried to make him feel better but they couldn’t succeed.   One night that he couldn’t breathe from the pain, he decided to call Ifaistos to his palace.

When Ifaistos arrived to the palace of Zeus, he ordered him to hit him with all his power to his head with a hammer. The young god Ifaistos did what his father told him and then something weird happened! In front of the amazed eyes of the Olympian gods, out of the head of Zeus jumped a fully armed blue-eyed daughter! She was holding a shield and she was wearing a helmet. She was Athena, goddess of war but also patron of wisdom inherited her father’s omnipotence and her mother’s wisdom. The young goddess saw her father and left her helmet and shield to his feet as recognition and respect to Zeus as the supreme god.

Goddess Athena, the patroness of the city of Athens

Goddess Athena and god Poseidon wanted both to be protectors of the city of Athens. So they decided that each one of them would offer a gift to the citizens of Athens. The god that would make the most beautiful gift would be the patron of the city. Poseidon stroked a part of the hill of Acropolis with his trident and created a well. People saw all this water and admired but the water was salty from the sea so they couldn’t drink it. Then Athena offered to the city an olive tree. That was very useful because people could eat the olives, produce olive oil and use the wood, so the winner was Athena, who became the patroness and named the city Athens.