Learn how to make the famous Greek Christmas cookies “melomakarona”! Recipe and video!

The history behind “melomakarona”

“Melomakarona” are the traditional Christmas cookies in Greece. Everyone loves them because they are moist with honey! The best melomakarona are those which are crispy on the outside and soft and moist on the inside! They are really delicious and they smell spices! The best Christmas proposal!

The etymology of the word “melomakarona” is Greek from the words meli (honey) and makaroni (spaggeti). The word makaroni comes from the dinner that ancient Greeks offer after the funeral of a beloved person. This dinner has the name “makaronia” and the pie they make in the memory of that person called “makaria”. Later in the “makaria” pie, Greeks added honey (in Greek the honey is translated as “meli”), thus we have meli + makaria, which over the years called “melomakarona”. The reason why those spiced melomakarona became the traditional Christmas cookies is that they have lots of honey which from ancient times in Greece, symbolized the creativity and the wellbeing, two things that we want from the new year to bring us!

The recipe is by Akis Petretzikis, who is one of the most famous chefs in Greece. He was also the winner of the Greek TV show “Master Chef”. In the video you can watch him prepare his delicious Christmas cookies “melomakarona” !

Ingredients for your “melomakarona”: 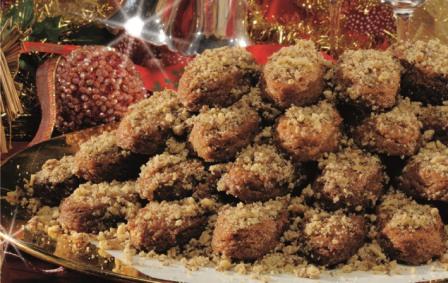