The new digital museum is dedicated to Plato and his work and just started its operation. All the inhabitants and visitors of Greece are invited to walk through the streets that Plato walked and taught and get initiated in his work through digital representations and special constructions included in the new museum.

Today, when we speak about the Academy of Plato, we have in mind both the specific neighborhood of Athens “Academy of Plato” and the actual academy, Plato’s school of Philosophy. This exhibition aims to be a bridge between the worldwide famous academy with the place that this academy was located.

One exhibition about Plato could be hosted at any big museum of the world. But his history begun in this city and that consist a big part of the narration of the museum.

This exhibition travels into time. It begins from the Athenian neighborhood “Academy of Plato” as it is today. Time goes backwards and travels us in Plato’s era, specifically outside Plato’s door. The visitor is about to knock on his door.

Rooms of the exhibition

In the first room of the museum, Plato is presented as a historical person who acted in 4th century BC in Athens. In the same time, is presented the place in which he acted, the archaeological place of the neighborhood of “Academy of Plato”. In the second room, visitor can learn about his work and methods. The visitor has the op 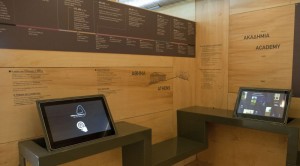 portunity to philosophize and understand Plato’s way of thinking. In the third room, a visitor can learn the ways Plato’s work travelled into time, from the direct successors of the Academy until today. The exhibition ends in the present years with the exit of visitors in today’s neighborhood.

With the help of the interactive exhibits, visitors have an active role in the exploration of the museum. For that reason, modern digital media of representation were created. Visitors have the opportunity to delve deeper into any subject they are interested in.

A place that has to do with Plato has to discreetly communicate with the neighborhood that took its name after his academy. The building of the new museum looks like a box, a box that opens and then closes again. The way to the entrance and the exit of the building follows the main the central road with starting point (and also ending point) the square, through which today is connected to the past.